A Game of Thrones detail 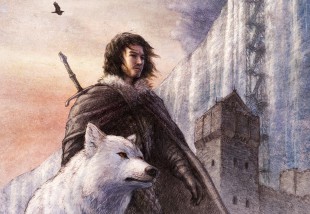 This was an entry to a competition held by norwegian publisher Vendetta. It received a semi official third place. It was made in 2011, a few months before the television series aired for the first time. I decided to portray John Snow, which also presented a good opportunity to include Game of thrones hallmarks like the wall, a dire wolf and a raven. I drew John to look somewhat, but not completely like Kit Harrington, to make a nod towards the upcoming TV show.

A lot of fantasy art has a rather glossy finish, which I thought wasn’t quite right for a Game of Thrones. I wanted something earthier, and decided to make it more of a drawing than a painting. The original pencil drawing was digitally colored and refined, but is still very evident in the final result. Alan Lee is obviously one source of inspiration.