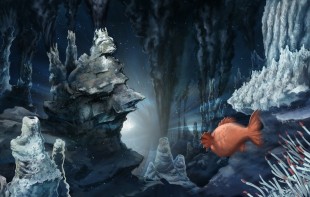 Racing through black smokers, concept art. Digital. Mara is a computer game project initiated by Nina Svane Mikkelsen as part of her PhD, and funded by the University in Bergen.

The game was based on natural conditions in the dephts of the ocean, especially along the mid-atlantic ridge. It was linked to the deep sea exploration project Mar-eco. The first idea for the game was an adventure game with elements of a racing game. Later it was decided to just focus on the racing parts. A fairly simple prototype of the game was realized.

In this concept piece, the central racing character Mara (a young Orange Roughy) enters a maze like landscape of black smokers. Black smokers are a kind of deep sea geysers, forming chimneys with superheated water pouring forth, looking like black smoke.