Development of the Gaarg race 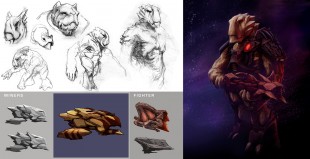 Some of the sketches from the development of the Gaarg race for Galactic Fleet is shown here. The Gaarg are powerful, brutal and warlike. “Orcs in spaces” was one of the cues given in the brief. I tried to keep a sci-fi feel to it, rather than Warhammer like orcs for instance. The finished version used in the banner is shown on the right.  The spacecraft of the Gaarg are somewhat based on the way they look, with stony, angular and slightly irregular shapes.